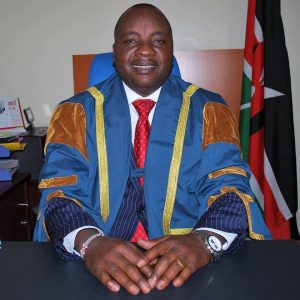 Honorable Joel Maina Kairu is the Speaker of the county Assembly of Nakuru where he chairs over 78 members of the county assembly (MCAs).

The Speaker is a trained and Registered Quantity Surveyor (QS) who holds a Master of Arts degree in Project Planning and Management and a Bachelor of Arts Degree in Building Economics both from the University of Nairobi.

Hon Kairu is currently engrossed in studying for a Doctorate degree in Strategic Management at Kabarak University.

He is an alumni of Mother of Apostles Seminary where he completed his high school education in 1991. He is a member of the Institute of Quantity Surveyors of Kenya (IQSK).

Hon. Kairu is also a member of the Impact Assessment Association of Kenya (IAAK) having being trained at the African Nazarene University on Environmental Impact Assessment. He has trained extensively on Alternative Dispute Resolution mechanisms such as Arbitration, Conciliation, Negotiation and Adjudication.

Hon Kairu was appointed the first Nakuru County Executive Committee (CEC) member for Roads, Transport and Public works by then Governor Kinuthia Mbugua in May 2013 where he served in the capacity until August 2017.

He was also instrumental in the decongestion of Nakuru’s central business district and installation of street lighting high masts and solar street lights that saw the reduction of crime within Nakuru.

Hon Kairu made his first foray into the world of politics when he submitted his name as a candidate for the office of Speaker, County Assembly of Nakuru in September 2017 where he was elected as the Speaker.

Speaker Kairu is involved in various charity works such as offering academic sponsorships to needy and orphaned students. In the past he has been a member of the board of governors of various schools such as Menengai High school and Nakuru Girls High school. He is also an avid reader and a sports man with a penchant for soccer and is an ardent supporter of Arsenal Football club and the Shujaaz Rugby team.