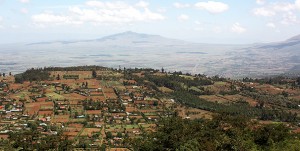 The Great Rift Valley from one of the view points on the Nakuru-Nairobi highway. Nakuru County is home to the second largest volcanic crater in the world.

The county is home to the second largest volcanic crater in the world — Menengai — after the better known Ngorongoro in Tanzania. Menengai has been one of the area’s major tourist attractions.

Lake Nakuru National Park, inhabited by millions of flamingoes, is also in the county while other beautiful spots for visitors from all over the world include Hell’s Gate National Park, where around 10 Hollywood movies have been filmed, the Olkaria Geothermal Wells, Lake Naivasha, Lake Elementaita — also home to flamingoes and pelicans — Njoro Castle, Hyrax Hill Museum, Kariandusi Museum and Mt Longonot National Park.

Right at the entry of the county from Kiambu, visitors are faced with a tricky choice: should they visit Mt Longonot, Hell’s Gate or Lake Naivasha? Hell’s Gate is separated from Longonot by a single farm, the Kedong Ranch, and the animals roam freely from one park to the other, while Lake Naivasha is on the opposite side.

Hell’s Gate is a scenic attraction with beautiful rocky features formed after a volcanic eruption thousands of years ago. Among these features are Fischer’s Tower which is a volcanic plug, the Central Tower which shows how lava erupted from the ground, natural steam vents and the famous Oljorua gorges where several movies — among them Tomb Raider II — were shot.

The effects of the massive volcanic action are evident from the layers of earth left clear to see in the gorge that runs through the park.

According to guide Joseph Seret, the gorge is so deep that when snakes fall into it, they lose consciousness only to wake up in a fury, lashing out at the enemy they thought had tipped them in … oblivious of the fact that their fall was accidental.

Hell’s Gate senior warden Nelly Palmeris, who is also in charge of Longonot, said Hell’s Gate was well known for team building trips, and to schools which send pupils there for geography tours, and for family outings.

Ms Palmeris said Hell’s Gate was the only park in Kenya in which visitors can commune freely with the wildlife and is popular for bike-riding, horse-riding and rock climbing.

Buffalos, antelopes, Maasai giraffes, hyenas, leopards, zebras and gazelles are among the animals at the park, which is also home to more than 400 bird species. It is home as well to the rare klipspringer antelope that appears to walk on the tips of its toes.

Then there is Lake Naivasha, the only fresh water lake in the county, and the lifeline of more than 20 flower farms. The lake is a popular tourist destination for bird-watching and for holidays.

About 40 kilometres from Naivasha is another attraction clearly visible from the Nakuru-Nairobi highway, the soda water Lake Elementaita, home to flamingoes, pelicans and hundreds of other bird species.

Elmenteita Badlands is a lava flow to the south of the lake, covered in bush and includes some spectacularly scenic peaks.

On the opposite side of the road is the Kariandusi Museum, based on an important prehistoric site where stone hand axes and cleavers were discovered in 1928 by the archaeologist Louis Leakey.

They were made by the stone age inhabitants who lived there between one million and 700,000 years ago. It is visited mostly by history students eager to learn about the evolution of man.

Microscopic algae:) Below the museum is a quarry where diatomite is mined — a chalky rock made up of layers of fossilised microscopic algae used in making water filters and insecticides.

The Hyrax Hills Museum is four kilometres east of Nakuru Town and shows the last traces of the Sirikwa, a sub-tribe of the Kalenjin from the Rift Valley who have been assimilated by other communities.

It is a prehistoric site with artifacts used by Iron Age people, whose tools included spears with heads made of fish bones. It is from Hyrax that it becomes clear that the entire area — all the way back to Naivasha —was once a giant lake.

There are numerous graves, one containing about 17 bodies of the Sirikwa and proof of a massive battle that forced them to flee the area.

Although Kenya Wildlife Service agrees that Lake Nakuru is the largest revenue earner among national parks — collecting between 20 to 30 per cent of the total KWS revenue — officials refused to release precise figures, saying they could be used by local councils to get KWS to send more money to them.

KWS spokesman Paul Udoto commented: “Nakuru is our largest earner but we cannot release the figures because they are sometimes used by politicians, especially civic leaders, to demand more from KWS, which is unfair.”

He said money collected from the five most popular national parks was used collectively to support the less famous parks and to protect wildlife.

The park is home to more than 400 bird species and is also a sanctuary for rhinos and the Rothschild giraffe.

People travel from as far as Uganda, western Kenya and the Coast to congregate in caves on the sides of the caldera for prayers, while others, desperate and unhappy, occasionally throw themselves into the abyss.

The most notorious suicide was in 2005 when a Catholic priest drove his car into the crater, while the latest was last year when a primary school teacher hired a boda boda motorbike from town, paid the rider on reaching the crater, then leapt to his death.

Lord Egerton Castle is a 52 room mansion built by a lovesick peer, Lord Egerton, for a woman he loved but who refused to marry him.
The castle is now a tourist attraction, used for accommodation and as a camp site. It is a popular place for weddings too.

Little known but interesting are the Njoro River caves, a site dating back to the stone-age. In the early 1930s, Mary Leakey discovered cremated burial sites estimated to be 3,000 years old.